On 4 March, International SOS coordinated a highly complex evacuation of four ICU patients, repatriating the individuals from La Réunion island to Paris. The operation was commissioned by the French Ministry of Health and carried out in collaboration with the SAMU, the emergency medical services in France, the Regional Health Agency, Air Austral and Aéroports de Paris. This is the first time that so many ICU COVID-19 patients have been transported simultaneously on such a long-haul flight.

“Transporting one or two seriously ill patients is part of everyday life. This particular situation was highly unique and even more complex, with all four patients in an unconscious and intubated-ventilated condition. Medical evacuations, particularly during the pandemic, are complex but this was even more so, requiring an even greater level of care and coordination. We were honoured to be called on for our expertise and proud to be part of the team that was able to transport the patients safely“, 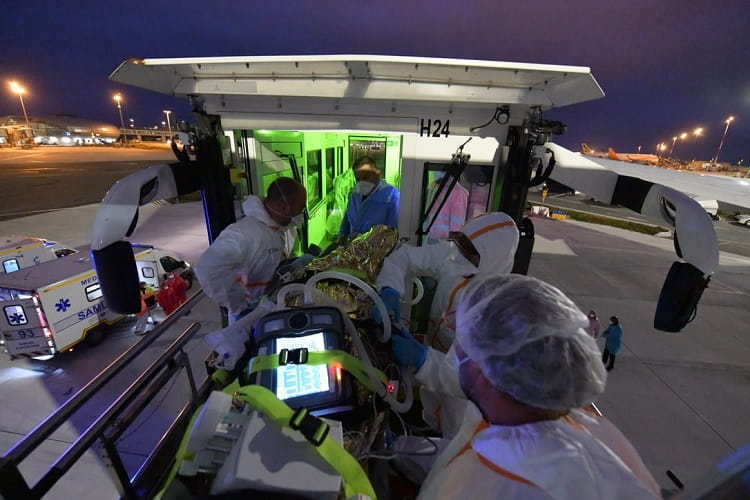 The chartered Air Austral Boeing 787 took off from Réunion Island at 9:33 p.m. local time (6:33 p.m. Paris time) and landed at Paris Charles-de-Gaulle airport on Friday 5 March 2021 at 5:15am local time, after an eleven-hour flight. A civil aviation exemption had been necessary to allow Air Austral to embark so many patients on stretchers and such a high volume of oxygen.

The mission was staffed by the SAMU from Paris and La Réunion, with 5 ICU doctors, 5 ICU nurses, 7 EMTs and 1 logistician, while International SOS provided a flight nurse and a logistics expert for supporting the various teams and interfacing with the aircraft crew and the International SOS Paris assistance centre. 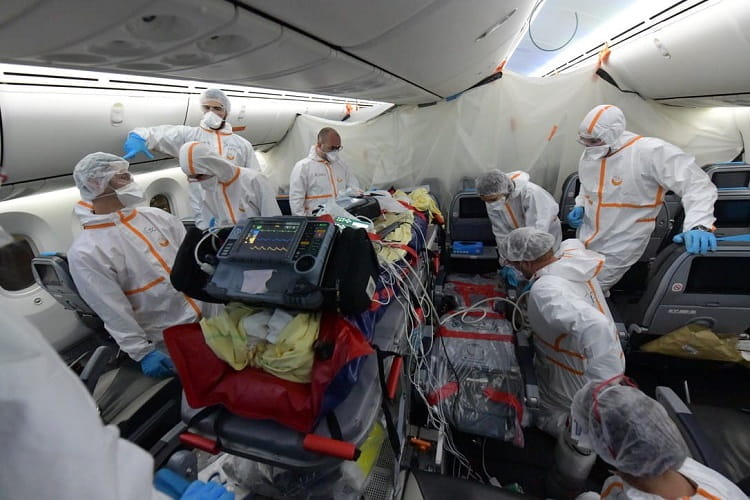 The International SOS Assistance Centre’s role was to interface with the various SAMUs, the airport and the aircraft, under supervision by the Health Ministry crisis centre, planning for and managing all requirements. Also, a critical aspect was to be able to quickly react in case of the aircraft diversion due to a technical incident, in order to prepare ground support for the patients. Due to the severity of the disease, advanced equipment was loaded and installed on the aircraft such as portable blood analysers, ultrasound machine and 2 ECMO machines (Extracorporeal Membrane Oxygenation), as well as backup ventilators. This represented one ton of medical equipment, along with 9,500 litres of oxygen for each patient.

About the International SOS Group of Companies

The International SOS Group of Companies is in the business of saving lives, protecting your global workforce from health and security threats. Wherever you are, we deliver customised health, security risk management and wellbeing solutions to fuel your growth and productivity. In the event of extreme weather, an epidemic or a security incident, we provide an immediate response providing peace of mind. Our innovative technology and medical and security expertise focus on prevention, offering real-time, actionable insights and on-the-ground quality delivery. We help protect your people, your organisation's reputation, as well as support your compliance reporting needs. By partnering with us, organisations can fulfil their Duty of Care responsibilities, while empowering business resilience, continuity and sustainability.

Founded in 1985, the International SOS Group, headquartered in London & Singapore, is trusted by more than 9,000 organisations, including the majority of the Fortune 500, as well as mid-size enterprises, governments, educational institutions and NGOs. 13,000 multicultural medical, security and logistics experts stand with you to provide support & assistance from over 1,000 locations in 90 countries, 24/7, 365 days.

To protect your workforce, we are at your fingertips: www.internationalsos.com